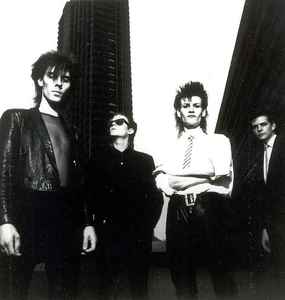 Profile:
English Post-Punk band, formed in Northampton in 1978.
Originally named "Bauhaus 1919" after the school of the same name, but dropped 1919 before being together for one year.

May 18, 2022
See them live if you get the chance, caught them at Cruel World and was blown away.
See 1 reply

What a phenomenal run Bauhaus had from 1979-83. Can't think of many other bands who covered so much new territory in such a short span of time. Experiments that worked, and still do. Much bigger than the convenient "gothic" tag they used to get.

December 10, 2018
I saw Peter Murphy performing live at Brixton Academy last night. It was supporting a 40th aniversary of Bauhaus so he stuck mainly to Bauhaus songs. It was a stunning show - I'd say iconic. The sound filled the theatre, he engaged with the audience and his voice was belter.

It was like being in the Eighties. Somehow as I say that it sounds like going backwards. But the reality is that so much of the key Eighties music is more timeless than that --------> Bauhaus, Echo and the Bunnymen, Talk Talk, Joy Division / New Order, Cocteau Twins, Cindytalk, Blondie, Dead Can Dance, Pet Shop Boys, The Cure, Comsat Angels, Siouxsie, Colurbox, Marc Almond / Soft Cell, Depeche Mode, Bjork, Morrissey . . . I do listen to current music (I like the Idles . . . ), but something about the Eighties scene, Indie economics really encouraged individually unique sounds.
See 2 replies

December 16, 2016
A gothic version of joy division?
The spiritual center of so much grim Glam to come, Bauhaus brought a dark flair for drama to the aftermath of Punk. Their haunting, exalting moodiness was never the same from song to song, yet they inspired legions of melancholic musicians to continue their legacy of unequaled theatrical tensions and existential horrors

Bauhaus has always rejected the "Gothic" moniker for everything they did and it′s quite right they have done it. This is not "Gothic" at all, not at least in the sense that it became later, this sort of circus for make up and rubber fanged vampires and all that dumped macabre kitsch.

If they were something, that was some sort of sinister aesthetes inspired by the likes of German expressionists, their music attest this imaginary and spiritual frequency. They wandered in the dark as morbid vagabonds observing the Londinum decadence, in the odd shadows from it′s alleys or exploring the unspeakable objects & forgotten stories from the basements and finding the trace of beauty in the view from attics over a city that was losing track of his own past. And all this poetic sense they had combined with the rabid cynicism of punk mudded down by the subtle experimental twist, always granting with this minimalist touch an odd atmosphere amidst the virulence from the music.

If Joy Division was the forefather of post punk, they are the grandads, they added the spices and the sparks to the bleak dimension from that terrible and insatiable youth, they were the burning coal in Artaud's grave, a macabre joke also, a sadistic intent displayed as red roses in the mausoleums or dances in catacombs, they were the scream proclaimed by Camus and Sartre made music. A glimpse of gleaming fire in the vast night from late English romantics. After them, "Gothic" came with some good, some bad, some worst personifications, but faulty, none as vital and poetic as them.