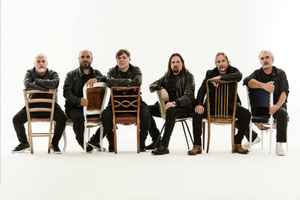 Real Name:
I Nomadi
Profile:
Nomadi (or I Nomadi, meaning 'The Nomads') is an Italian band formed in 1963 and still active.

The original 1963 formation of six was founded in Reggio Emilia: Augusto Daolio (vocals), Beppe Carletti (keyboards), Franco Midili (guitar), Leonardo Manfredini (drums), Gualtiero Gelmini (sax) and Antonio Campari (bass). In the same year I Nomadi were signed by Frankfurt Bar in Riccione.
Franco Midilli had to leave the group that summer for compulsory military service. The line-up changed frequently; in 1964 Madfredini left after the death of his parents; so did Campari and Gelmini, who were replaced by Gabriele ‘Bila’ Copellini on drums and Gianni Coron on bass.
In 1965 they released their first 7", featuring the song "Donna, la Prima Donna" ("Woman, the First Woman") and "Giorni Tristi" ("Sad Days") in collaboration with De Ponti and Odoardo Veroli (known as Dodo) as writer and composer.
Their first hit was 1966's "Come Potete Giudicar" ("How Can You Judge", a cover of Sonny Bono's "The Revolution Kind"). In the wake of this success I Nomadi came into contact with songwriter Francesco Guccini, who would would write for them songs such as "Noi Non Ci Saremo" ("We Won't Be There"), "Dio è Morto" ("God Is Dead"), "Canzone Per Un'amica" ("Song For A Friend").
In 1990 Cico Falzone and Daniele Campani joined the group on guitar and drums respectively. In 1992 bass player Dante Pergreffi was killed in a car crash on May 14 and then, on October 7, Augusto Daolio, the band's frontman and icon, died of an aggressive form of lung cancer. The group decided to continue with Danilo Sacco doing vocals, Francesco Gualerzi on wind and vocals and Elisa Minari on bass. Gualerzi and Minari left the group at the end of 1997 and were replaced by Massimo Vecchi and Andrea Pozzoli, who took part in the summer tour of that year and was then replaced by Sergio Reggioli on violin.
At the end of their 2011 tour, Danilo Sacco left. On February 25th 2012, new singer Cristiano Turato joined. In 2017 he was replaced by Yuri Cilloni.
Sites:
nomadi.it, MySpace
Members:
Amos Amaranti, Augusto Daolio, Beppe Carletti, Christopher Dennis (2), Cico Falzone, Daniele Campani, Danilo Sacco, Dante Pergreffi, Elisa Minari, Francesco Gualerzi, Massimo Vecchi, Paolo Lancellotti, Sergio Reggioli, Umberto Maggi, Yuri Cilloni
Variations:
Viewing All | Nomadi
I Nomadi, I Normadi, Pubblico Nomade