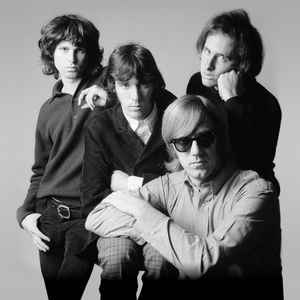 Profile:
American psychedelic rock/blues rock band formed from "Rick And The Ravens" in July, 1965 in Los Angeles, CA, United States by Jim Morrison and Ray Manzarek. After the death of Jim Morrison on July 3, 1971 in Paris, the other band members released two more albums, but they were not very successful. In April 1973 the band broke up.

May 22, 2021
Light my Fire describes the summer of love all in one song. Golden sunsets, drugs. To this day in 2021 it still is my remembrance of "that time" of my life. The organ and guitar solos are psychedelia personified. I was 17 when it came out, and it helped me grow

September 3, 2019
Great musicians. They had a lot of guts. World famous.

The excitement Jim Morrison elicits nearly thirty years after his death is just one of the many fascinating and seemingly eternal aspects of the Doors. Lest it be forgotten, the band also recorded some of the darkest and most challenging music of their time. What is so distinctive about the Los Angeles monster group is how the musicians -- especially the multifaceted Ray Manzarek -- successfully melded rock, jazz-inspired improvisation, and Weill-esque angularity into dramatic settings for Morrison's haunting baritone and acid-damaged poetry. Their amazing range set them apart from their Psychedelic brethren, as they moved seamlessly from the propelling rock of "Break on Through," the breathy beauty of "Indian Summer," the manic blues of "Five to One" and the Coltrane-flavored "Light My Fire" to the funky edginess of "Peace Frog" (it could be argued that the latter was the single biggest influence on the 1980s "Madchester" scene). Whether you feel that Morrison was a brilliant and complex modern-day shaman or a second-rate pretty-boy poet who lost it to alcohol and pills, it's impossible to deny the long-lasting impact the Doors have had on rock 'n' roll. One of the greatest bands of all time...Joy Division and in particular Ian Curtis cited Jim Morrison as his inspiration, riders on the storm was his favourite track, his baritone voice was always compared to Morrisons ;)

November 20, 2016
Probably the greatest band ever in the history of music. Magical.
See 1 reply

The Doors ... This band helped shape my life. I got into them at an early age and almost 20 years on i'm still hooked. Ray Manzarik is amazing he plays keyboards and bass and filled in when Morrison failed to show at his own concerts. Robby Krieger is an amazing guitarist and John Densmore was definitley an under rated drummer. Jim Morrison usually stole the show with his boyish good looks and long flowing hair. Putting his all into every performance he helped lead himself to an early grave. This band surely must go down in history as one of the greatest band ever. They still have a huge following to this day with record sales and merchandising still at extremely high levels. Still an inspiration too many, i will never tire of listening to them.

Awesome psychedlic bluesy rock band that sometimes don't get the credit or respect they deserve and are more associated with Jim Morrison's supposed antics. They created a really wonderful unique sound that still sounds incredible today. Their 6 albums are excellent, all created within 4 years. Some of their pieces of music are pure theatre/poetry incorporated into music, 'The End' is absolutely mesmerising, as is 'When The Music's Over'. 'Light My Fire' is just a fantastically funky rock tune that still does the business today. 'Riders On The Storm' is exquisite mellow jazzy rock... there are just so many great records by this fantastic band. Their best album for me is the first self-titled one and then I would say 'Strange Days', closely followed by 'LA Woman' and then 'Waiting For The Sun'.
See 2 replies