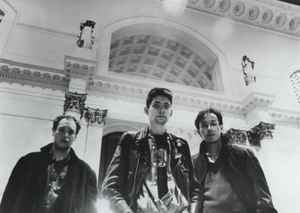 Big Black's aggressive and abrasive music was characterized by distinctively clanky guitars and the use of a drum machine rather than a drum kit. The band's lyrics flouted commonly held taboos and dealt frankly—and often explicitly—with politically and culturally loaded topics including murder, rape, child sexual abuse, arson, racism, and misogyny. Though the band's lyrics contained controversial material, the lyrics were meant to serve as a commentary or a display of distaste for the subject matter. They were staunchly critical of the commercial nature of rock, shunning the mainstream music industry and insisting on complete control over all aspects of their career. They booked their own tours, paid for their own recordings, refused to sign contracts, and eschewed many of the traditional corporate trappings of rock bands.
Sites:
Wikipedia, tokvev.com, punkdatabase.com
Members:
Dave Riley, Jeff Pezzati, Santiago Durango, Steve Albini

August 29, 2021
Living in a Midwest crossroads nearly equidistant from Chicago, St. Louis, Nashville, and Louisville in the 1980s helped Big Black make sense. The abrasive, metallic guitars on top of a Roland TR-606 Drumatix played through a stack guitar amplifier sounds like farm equipment, factory noise, and a near-fatal fireworks accident happening at the same time. The confrontational lyrics take inspiration from newspaper articles. To call the subject matter dark is an understatement. Topics include community-wide paedophilia, sex in burning houses, amateur slaughter techniques, a truck driver's personnel guide to recommended lot lizards, mob hits, rape and murder at the family fish-fry, rye bread mold poisoning, hard-boiled detectives... Do you get the picture? The few cover songs are telling of the musical influences (Kraftwerk, Wire, Cheap Trick). Indeed, a big black sonic reflection of humanity, this is the Abyss looking back.

August 7, 2021
My introduction to Albini was listening to several of his scathing tirades against sampling. I was pretty well versed in 80s punk, and was shocked when I heard his music. It’s like a child trying to ape punk music, indistinguishable from any other contemporary punk acts except for the fact that although he correctly mimics their sounds and movements, he seems to be tone deaf, resulting in something even more amateurish than punk itself, devoid of any of the emotion or sincerity.
See 1 reply

April 17, 2021
Shouldn't the Big Black Box be its own release rather than a version of Pigpile?

June 13, 2016
One of the best US-Bands ever. Inexorable, uncompromising, fascinating and straight: both - live and in studio. This sound never gets old. Only us.

April 7, 2016
Subterranean Records had a mail-order catalog with the best description of this band: "Like being trapped in a twisted metal wreckage and learning to love it"

Ah Big Black, how I love thee so. Not that Big Black themselves would approve of such mushy, pathetic sentiments as 'Love'. A true bastard band of hideous epic filth, revelling in the degradation of the world around them while burning it all down. Big Black was the sound of my youth and I was a very unhappy child. Also, they had the best artwork ever for a brutal noise rock explosion. The sound of your lungs collapsing while the busdriver rapes your kids. And I'm not saying that for shock value, that's what the songs are about. Classics everyone. Also, try playing 'Jordan, Minnesota' or 'Kerosene' in your techno set and see what happens (usually everyone leaves, but they're wrong so do it anyway). Just don't use 'Songs About Fucking' as sex muzak, though should you find someone it gets off, you're totally in luck.