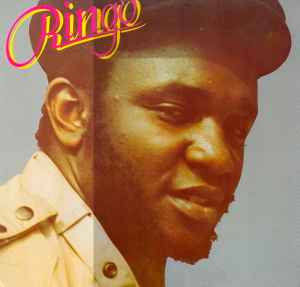 Profile:
b. 1961, Jones Town, Kingston, Jamaica, West Indies. Johnny Ringo first began his career working in a record shop where he met Welton Irie, which proved to be the start of a long association. Both were influenced by, and shared their enthusiasm for, the popular DJ Ranking Trevor. Ringo joined the Soul Express and Ripper Tone sound systems as an operator. In the late 70s he was given an opportunity to chat on the microphone, which led to a number of recording sessions. His observations on life in Jamaica became a success, although it was the fashionable slackness (lewd) lyrics that proved most popular.

The latter’s lyrics were often used by other DJs, such as Jah Bull’s ‘Push Daughter Push’. In 1982 Ringo had an international hit with ‘Dub And Lef’, backed with Edi Fitzroy’s ‘First Class Citizen’, produced by the Musical Ambassador. With the Roots Radics he chronicled the advent of the video recorder in Jamaica with the succinctly titled ‘Video’, which led to numerous DJ hits on the subject. He joined Lees Unlimited and the Gemini sound system, which was widely acknowledged as the sound that introduced Yellowman to the world. The sound followed Ray Symbolic’s Hi Fi on an international tour, visiting the UK in 1983.

It was while touring the UK with Gemini that Ringo voiced ‘New Yorker’ and ‘Nice And Easy’ at Fashion Records’ A Class studios. He also worked with Sugar Minott, who had recorded dub plates for the sound and also produced Ringo’s 1983 hit, ‘One O’Clock Rock’. Often credited as simply Ringo, he continued to record throughout the 80s, including the first in a series of clash albums for the Fashion label featuring the two singles and other voicings from the A Class sessions.
Sites:
Wikipedia
Aliases:
Bradley Miller, Ringo (5)
Variations:
Viewing All | Johnny Ringo
Daddy Ringo, J. Ringo, Johnnie Ringo, Johny Ringo, Ringo