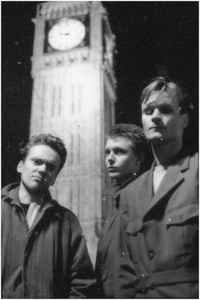 Profile:
Bourbonese Qualk began in Southport (UK) in 1979 when Simon Crab and his brother Ted began working together to create experimental music grounded in a DIY anarchistic spirit.
Ca. 1982 after moving in a squat in London Julian Gilbert and Steven Tanza become members. They run the Ambulance Station as open culture space with an own studio, place for rehearsals, exhibitions and performances, printer workshops etc. and manifested their publications under the umbrella Recloose Organisation. Julian Gilbert left during 1985 to pursue a different path and
Steven Tanza around 1986 working as The State in music and concentrating on art projects.
From 1986 onwards Owen If (Rossiter) on percussion and multi-instrumentalist / guitarist Miles Miles became core members alongside big contributions by Kif Cole. They stayed true to their origins, stylistically uncompromising publishing and touring whenever they wanted with full control of their music, image and graphics.