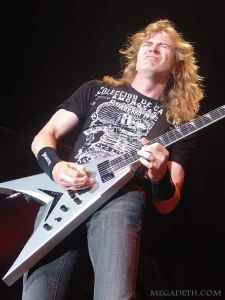 Former Metallica member, he was fired from the band in 1983 because of drug and alcohol problems that often resulted in violence against other band members. He would suffer from heroin addiction until 1995 when he was finally able to quit the drugs completely.

In 2002, Megadeth disbanded as a result of nerve damage (radial neuropathy) to Mustaine's left arm. He has since recovered feeling in his arm, and the band has reformed and begun to record and tour again.