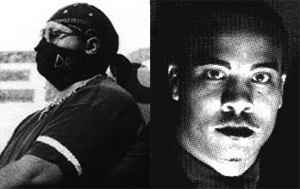 Profile:
Detroit electro-techno outfit Drexciya was conceived in 1989, but first came into the public eye in 1994 with "Aquatic Invasion" - the first of a thematic series of releases. Drexciya's James Stinson and Gerald Donald remained hidden behind their alias for much of the group's existence, communicating a complex personal mythology of a "Drexciyan" race of underwater dwellers descended from pregnant slave women thrown overboard during trans-Atlantic deportation. Within this fiction, their music - which they claimed was recorded "live in the studio" rather than programmed - was imagined as a "dimensional jumphole" between their black African roots and the contemporary USA.

February 8, 2021
One of a few indelible proofs of why Detroit is the most innovative techno spot on the solar system.

June 29, 2020
Their music just gets better and better with time. The most important ‘band’ in electronic music (or any type of music for that matter) Since Kraftwerk. I’m liking them to Kraftwerk because of their amazingly strong album output. Their music works really well as a long player which can sometimes be the downfall of some electronic acts. At my count Drexciya ( by that I mean Donald and James presumably working together) and their aliases have released 10 albums, all high quality. Mystery still surround their releases which keeps it interesting. Now a comic written by Abdul haqq is taking the concept in another direction. Music that will live on. Together with other Detroit legends UR, bands New Order, The Jesus and Mary chain and spacemen 3 have improved my life immensely. Thank you James and Donald

October 9, 2019
Drexciya in one word: outstanding. Drexciya in four words: completely and absolutely outstanding. Hardwax lists them as a genre of its own. Clone have created a sublabel for their music. Drexciya seem to exist beyond time and space, a gospel to humanity from unknown depths, transmitted by two gifted individuals. Respect.

I am a Fan of Drexciya ,i have almost all records in my collection and love the stuff. It's magical ,soulful and unique electro stuff and i don't know many musicians i like as well.

May 16, 2016
drexciya for me is a part of an important movement and religion, just respect..

November 24, 2013
there is nothing to be said that hasn't been said about Drexicya, it was a very important timeframe in Detroit. the thing is that you can never define what Drexciya music was, its a fusion of funk-electro-house and even broken beat from time to time.

these were humbled musicians way before social media arrived, they were not looking to be hyped but to make a statement about their own vision.

July 24, 2012
If I can't go to space in this lifetime, at least I can go to the depths of the ocean. Thanks for the music James.

April 27, 2011
There is an interview where James says ' Even if i die next week or whatever, there will still be a lot of music left, i have a nice stock pile left, oh yea'

Will this music ever grace us?
See 2 replies

August 13, 2008
Drexciya: Techno from The Deep, very deep H20. Even though the programmers are trying to destroy all of mankind's creativity and artistic freedom, Drexciyan Tactical Seaforces have been dealing mighty blows ever since they first rose above water in 1991.

How did they rise from aquatic hibernation to wavejumping all over the world using high-tech-aquatic-sonic-waves?

By creating The greatest Techno of all time. Analogue Perfection. Innovating, futuristic, original, spontaneous, intelligently produced electronic robot funk including that ohh so important soul/love and dedication to the music, all of which only seem to reside in magical city Detroit. Thats how!

December 15, 2007
Drexciya is the place where i can rest my soul.
I need this because this world is too wild for me. In the water? Hahaha yeah man. I belong to the Aquazone.
Why not space? Space is great! I can only do one thing at the time you know. So we'll do this later? Yeah we will. Yes we will.

Mr. J. Stinson did not know about the hat. We do and take it off for him.
An outer-world achievement was reached. Although in his career he sadly could not fulfill the ultimate presentation. Knowing of his disease and talent we have showed our love. Within our possibilities we supported James to make sure he could reach the goals in his lifespan. The story does continue..